Since the bomb placed under Myer’s bed was rumored to be a Mafia plant, I asked him if he had any bodyguards. He flipped up the corners of some colored comics lying across a coffee table. A revolver pointed lazily toward me. ‘Don’t worry’ he laughed ‘I have a permit for it. The Panamanians will let me carry a machine gun if I want to.’
From multiple award winning Canadian Journalist Sylvia Fraser’s interview with Myer Rush in Panama 1968

Reads like a blast of adrenalin: every episode like an exploding meteorite. If you read one chapter, you’re hooked. You can’t put it down…A trail of crime, violence, sex and deceit is the substance of the book: big money easily made, quickly spent; from prison to townhouse; from childhood to old age; from mistress to family; from street life to synagogue, Rosen tells us about his gangster uncle.
J. Tony Serra
– Trial Lawyer of the Year Award Winner, Author of Walking the Circle.

“Rosen tells of his life quite movingly”
Alan Caruba, Editor

– Bookviews.com and Founding Member of the National Book Critic’s Circle
BOMBED IN HIS BED: The Confessions of Jewish Gangster Myer Rush is an as-told-to book by Bruce Farrell Rosen, his nephew. Rush was a very successful gangster who grew up in Depression-era Toronto, a man who would have been successful in any enterprise, accumulating wealth through crime and legitimate enterprise…He was, as the saying goes, larger than life…There is no way to briefly describe his life and we can thank his nephew for what is a very interesting biography.

“…An outstanding book”
Bonnie Cehovet
– Writer/Editor of BonnieCehovet.com
…An outstanding book, in terms of readability, research, tone, and interest…Rosen writes through multiple lenses – journalist, nephew, son, and observer…A beautiful narrative, this book is a wonderful way to get the story out about a less than perfect man who did his best to live life according to his own rules…

“Wow – what a bombshell!”
Merla Zellerbach
– Author of several novels including “A-List Murders”
Former San Francisco Chronicle Columnist
Wow – what a bombshell! Don’t expect to start this book and set it down…Through a series of personal interviews, Rosen follows his gangster uncle around the world as a boy and then as a man, who accumulates wealth through crime, stealth and unbelievable chutzpah. This “lifetime of memories” written in Rosen’s beautiful, polished prose is a book you won’t forget. 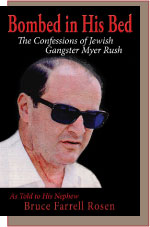 Available at ATLAS BOOKS
and on AMAZON